Is the information superhighway cowboy friendly?

Scott Anderson doesn’t just think so, he’s counting on it.

Anderson directs operations for Agri-Best Feeds, an up-and-comer in the Billings livestock business that markets unique feeding supplements for cattle and horses. What distinguishes Agri-Best’s products is the digestive science behind them, which requires more of a classroom session than a glossy sales pitch. 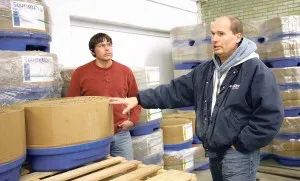 To get ranchers up to speed on what Agri-Best offers, Anderson gives online seminars every couple of weeks to educate ranchers on the best ways to beef up their beef through better feed.

“Guys focus on basic ingredients. They say ‘I need this much protein.’ That’s where the education comes in,” said Anderson, who last week was moving into the old Pierce Packing Co. slaughterhouse at 33 N. 15th St.

Several times a month, Agri-Best representatives from one of a half-dozen locations across the West go online to talk about the science behind ingredients like ProBiotein, a cocktail of dry yeasts and enzymes that can help an animal get 25 percent more value from their food through better digestion.

Agri-Best sells SweetPro, a livestock feed made of dried distillers grains, chelated vitamins, minerals and digestion aides. The product was first introduced by Agri-Best founder Irv Haidle to Billings at the NILE show in 2006. Since then, the number of dealers in the company’s five-state area has soared from 15 to nearly 50. The Pierce Packing location gives the company its first retail sales outlet, as well as a cavernous wholesale warehouse.

SweetPro is the brainchild of Bob Thornberg, who became interested in distillers grain as animal feed during the 1980s while working in North Dakota’s ethanol industry. At the time, oil was priced sky high, so the ethanol market was booming in the Dakotas and the Midwest, where small companies were turning a profit making ethanol from corn.

Biofuel producers were cranking out grain alcohol and getting good enough prices for it that they weren’t too concerned about doing anything with the grain once the ethanol was made. Some simply threw it away. Others sold their post-ethanol grain by the truckload to nearby feedlots. The grain made good food for feedlot cattle, but it took up a lot of room and quickly spoiled, which made it impractical for free-grazing range cattle.

Thornberg thought his biofuel peers had the equation backward. The real product was the animal feed, not the ethanol. Once the starches were extracted from the corn to make ethanol, the altered grain was actually a better feed for range cattle. The grain no longer contained the starch that cattle struggled to break down, but it still had the protein and nutrients.

Range cattle didn’t need starch; they were getting plenty already from the grass they ate. Thornberg blended vitamins and chelated minerals into the grain, then added enzymes, which helped cattle get more from their food. The result was a supplemental feed that allowed ranchers to use 25 percent less hay. That saving was large enough to cover the costs of the supplement, either by keeping a rancher’s hay bill down, or by extending the usefulness of his pasture by a quarter.

He then pressed the supplement into stackable, dense, 250-pound cakes that store for 18 months without breaking down and could be left in the field for cattle to gnaw on.

“If your forage isn’t the best, you use a high-quality feed like SweetPro and all of a sudden you’ve got something to work with, because now you can take 25 percent more out of it,” said Daryl Haidle, of Agri-Best Feeds.

Back at the ethanol plant, the hope is that SweetPro sales will take the pressure off ethanol to pay the bills. Profit margins for the ethanol are fairly thin and easily undone by rising grain costs or lower gas prices. SweetPro’s motto: “Feed first — ethanol as a byproduct.”

The other part of the AgriBasics equation is Redmond Natural Mineral Salt. So rich in trace minerals that it’s natural color is red, the salt mined in Redmond, Utah, was added to the AgriBasics lineup as a supplement to SweetPro. Animals need salt. Redmond markets its salt for people and livestock.

The salt complements SweetPro, because cattle craving salt don’t care where they get it. They’ll chew through supplemental feed quickly for what little salt is available, and that can drive up feed costs. A simple salt lick fixes the problem fairly easily.