Not all salt is created equal! Redmond Natural delivers unprocessed sea salt with over 50 trace minerals essential to health. The products allow animals to better utilize their feed, resulting in increased weight gains, and improved overall health. Receiving the OMRI (Organic Materials Review Institute) seal of approval, it is perfect for organic operations across the US.

The balance and proportion of these minerals have caused some amazing results. Redmond Natural products are not only an excellent mineral source, but a superior toxin binder. 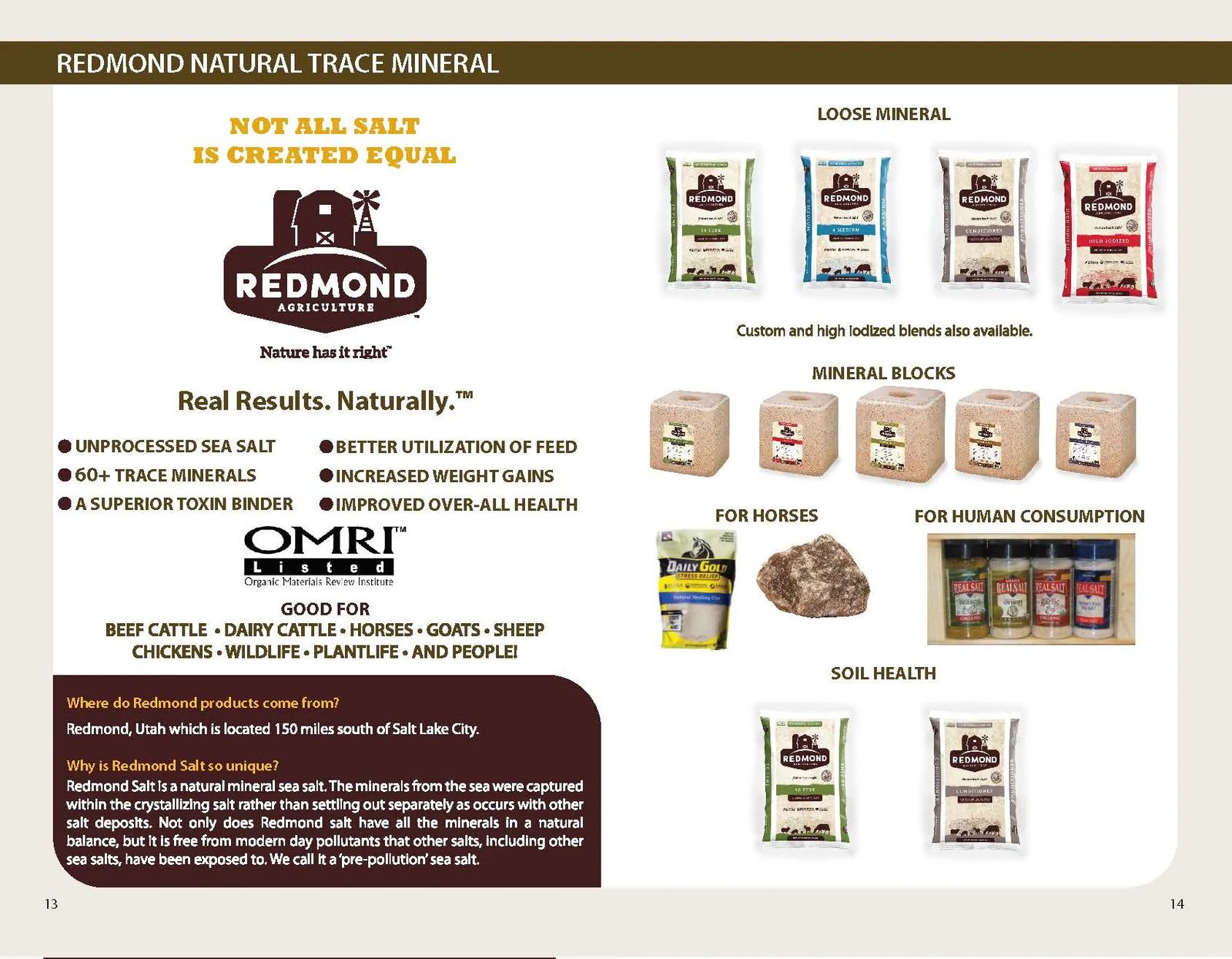 Other livestock and wildlife also thrive on Redmond Natural products. Along with cattle and horses; goats, sheep, chickens and wildlife all reap the benefits of Producers have reported higher wool production and healthy deer and elk populations. 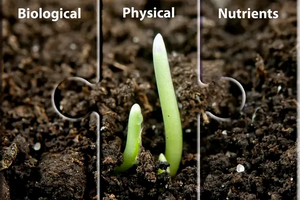 Redmond Natural is available in:

Last fall we fence-line weaned 285 calves on our hay meadows and SweetPro’s Kaf Kandi. They immediately took to the Kaf Kandi and consumption was right where it was supposed to be. The calves seemed to hold good body condition, and health was excellent with having to treat just one in 60 days. As with anything new, we were a bit skeptical of weaning the calves on the tubs for the first time. We were very impressed with the results and really appreciate the convenience of the tubs. Klint Swanson - Shipwheel Cattle Co - Chinook, MT ★★★★★

Where do Redmond products come from?

Why is Redmond Salt so unique?

Redmond Salt is a natural mineral sea salt, left as a deposit from an ancient sea during the Jurassic period. The minerals from that sea were captured within the crystallizing salt rather than settling out separately as occurs with other salt deposits. Not only does Redmond salt have all the minerals in a natural balance, but it is free from modern day pollutants that other salts, including other sea salts, have been exposed to. We call it a ‘pre-pollution’ sea salt.

None that we know of. Although there are several other companies who tell their customers that their salt is “the same as Redmond’s,” we have never found any other salt, either natural or man made, that is equal in analysis or performance to Redmond Natural Trace Mineral Salt.

Why do animals prefer Redmond Salt?

We believe it is due to the 50 plus natural minerals which are found in the Redmond salt. We believe that animals have an innate sense of what is best for them.

Are the minerals in Redmond Natural Trace Mineral Salt readily available to animals?

Absolutely. If they weren’t, we wouldn’t get all the testimonial reports back from customers telling of the improved animal health witnessed after changing feed programs to include Redmond Salt. If the minerals weren’t available to the animals, these benefits wouldn’t be prevalent.

Why isn’t there scientific data supporting the health benefits reported for Redmond Salt in livestock?

We have not chosen to spend our money on such. The grand majority of all scientific data is the result of some company paying for specific results. When a university is asked to prove something, and is given the money to do it, the results tend to lean toward the buyer’s favor. Negative research translates to unhappy customers that are not likely to return.

We are like our customers who place more importance on how the animals themselves respond to our salt rather than what some Ph.D or university says about it.

When feeding Redmond Salt, do I feed more, less, or the same as other salt?

That depends on many factors, primarily the animals’ mineral condition before they receive the Redmond product. When animals are first given the free choice option of Redmond Salt, they have been known to consume up to four times more of it than other salt until they get their mineral needs taken care of. Once their bodies have a healthy balance of nutrients, they tend to cut back on salt consumption to a level equal or even lesser than that before the switch.

Do I need to supplement any other minerals when I feed Redmond Salt?

This depends on many factors outside of our control. We don’t like to oversell our products, so our recommendation is to replace whatever salt is in your program with the Redmond Salt and to keep everything else the same. Watch your animals for changes (for example, shine in hair coat, rate of gain, herd health, etc.) and then decide whether or not you want to make other changes to your feed program.

Can I feed Redmond Conditioner along with my current vitamin/mineral supplement?

Certainly. The Redmond Conditioner enables the animals to take more nutrients out of their feed. The full range of minerals in the Conditioner compliments anything else you are feeding without being so high in any one mineral that you need to change your program as you add it. After using Redmond Conditioner for a time, you may want to make some changes based on what you see in your animals. Many customers report such improvements in hoof health, stamina, or weight gain that they begin to reduce other supplements because they can see that their animals don’t need them.

Are the health benefits I have heard about from Redmond products guaranteed?

No, because every animal is different, and every feeding situation varies. We only guarantee that Redmond products will tip the scales in your animals’ favor. Often, that tip is enough to make problems go away. But sometimes, if the animals are so out of balance that things are really bad, it may not result in immediately obvious improvements.

Redmond Salt is more expensive than other salt. How can I afford to feed it?

Is the livestock salt the same product as Real Salt granular?

No! They do come from the same deposit but only Real Salt should be fed to your family for the following reasons: 1. The livestock salt comes from a natural deposit that has enough ‘sand’ to be gritty in your teeth. The Real Salt is hand selected from the more ‘pink’ deposits which have a good mineral analysis but not as much ‘grittiness.’ 2. The Real Salt is handled in a food grade manner through food grade equipment. If we spill or tear a bag in the livestock salt production process it gets walked on until clean up and is thrown in the next batch for bagging. Spilled food grade salt is no longer food grade. We only feed Real Salt to our families.